Cinereous Vulture in West Africa: from vagrant to regular visitor?

Cinereous Vulture is considered a rare vagrant to sub-Saharan Africa, with just a handful of observations from the western Sahel, mainly from Senegal but also at least one from Mali. Last winter several new records were obtained from the region, including two from Senegal and the first observations from The Gambia and Mauritania.

Last winter’s records from Senegal, Gambia and Mauritania were described in a series of three posts on the MaghrebOrnitho blog (highly recommended for anyone interested in birds of NW Africa!), while the previous record, from 2013, was reported on SenegalWildlife. However, the first Senegalese record of the species was never published and it’s only recently that it was uploaded onto eBird, now also with photographic documentation. It was seen north of Diourbel on 6 January 1987 by a British group. As such, it’s probably a good thing to set the record straight, and recap all known records from Senegal.

The 1987 observation was reported to François Baillon, who at the time was running the French overseas research institute (ORSTOM, now IRD) in Mbour. In a hand-written letter he confirmed that there were no previous records from Senegal, adding that he has seen a great diversity of raptors in this central region of Senegal, including Egyptian Vulture, Lappet-faced Vulture, White-headed Vulture (now very rare here!), Lanner, Peregrine, Lesser Kestrel, Short-toed Eagle, Beaudouin’s Snake-Eagle, Booted Eagle & Bonelli’s Eagle. Of note is that the same group also saw a group of Mottled Swifts during their tour, right by the Gambian border on January 3rd 1987 (“20+ feeding over bush fire. The birds were seen immediately after crossing into Senegal and may well have crossed into Gambia as well.”) – prompting Baillon to mention that he has regularly seen Mottled Swifts in the Niokolo-Koba in January & February 1986 as well as in February 1987 near the river Gambia. Anyway, back to our vultures…

As it turns out, this first country record was also the first for Africa south of the Sahara, given that it predates the record of a Spanish-ringed bird found dead in Mali’s Sikasso region on 19 January 1995. This means that there are now at least seven observations from Senegal, listed here in chronological order:

2) 2005: a bird ringed in Spain was recovered in Senegal in January 2005 (in HBW; no precise date is given and no further location info is available, though I assume that it’s the Mbour area as shown on the map with ring recoveries in this publication by de la Puente and colleagues, 2012).

5) 2013: an immature near Tiom in the Khelcom area (north of Kaffrine) on 23.1.13, with a hundred or so other large vultures at a carcass (L. Majorel, L. Puch et al.),  reported on this very blog here though at the time incorrectly referred to as the second record for Senegal.

6) 2018: one near Fatick on 30.1.18, photographed by Julio Rabadán González (two photos on observation.org), see also last picture in this post.

7) 2018: one at Sagata (east of Kebemer, along the road to Doyene Dakhar) on 26.2.18 photographed by a Dutch tour group, different from the Fatick bird – see the MaghrebOrnitho post for more details on this and the previous observation.

Just two days prior to the Sagata observation, a Cinereous Vulture was filmed and photographed while feeding with other vulture species at a vulture feeding station run (apparently illegally so!) by a Spanish group, the first record for Gambia. And the first for Mauritania was photographed just a couple of months earlier, on 9.12.17 in the Banc d’Arguin area. The latter was ringed as a chick in the Sierra de Guadarrama near Madrid on 13 July 2017.

The map below shows all of the above observations, i.e. all records from sub-Saharan Africa plus the one from Mauritania (the location of the Malian record is approximate as no precise locality was given).

With at least three birds involved between The Gambia, Senegal and Mauritania, last winter’s records likely reflect a real increase in numbers rather than just an effect of any hypothetical better observer coverage. This trend is fairly obvious in Morocco, particularly at Tanger on the African side of the Strait of Gibraltar, where no less than four birds were seen on a single day last year, on November 10… Even more impressive, the same day the team counted some 2,700 Eurasian Griffons here – that must have been quite a sight!! Further details here. It’s actually quite possible that some of the recent West African sightings were of one or several of these four birds seen at Jebel Moussa. Formerly considered an accidental visitor to Northwest Africa after going extinct as a breeding bird, Aeypius monachus is now seen as “a regular migrant and wintering species in small numbers” according to MaghrebOrnitho.

Cinereous Vulture – formerly often referred to as Eurasian Black Vulture – is classified as Near Threatened, mainly because the global population is relatively small (7,800-10,500 pairs, roughly equating to 15,600-21,000 mature individuals) and because there have been continued declines in the Asian parts of its range. In contrast, the European population is doing pretty well it seems, particularly in Spain which has seen increases possibly over 30%, with estimated total breeding population of some 2,440 pairs. After having seen the species for the first time in northern Greece many years ago, I was fortunate to see some of the Spanish birds during a visit to Madrid last January, right on the outskirts of the city while waiting for the local Spanish Imperial Eagles (which eventually did show up – a long overdue lifer… and a potential vagrant to West Africa!). A reintroduction scheme in southern France lead to the establishment of a small population there, and the species is becoming a regular summer visitor to the western Alps during post-breeding dispersal.

This massive all-dark vulture is pretty straightforward to identify and should be easy to pick up among the local vultures and wintering Eurasian Griffons, which they often seem to associate with. The few records so far show that the species can show up pretty much anywhere north of The Gambia, though the “Vulture Triangle” centered roughly on Louga, as well as a central belt stretching from Mbour to the Khelcom, are clearly more likely to yield more observatins. Let’s see if the current trend continues, which given the increase in Western European populations seems rather likely. 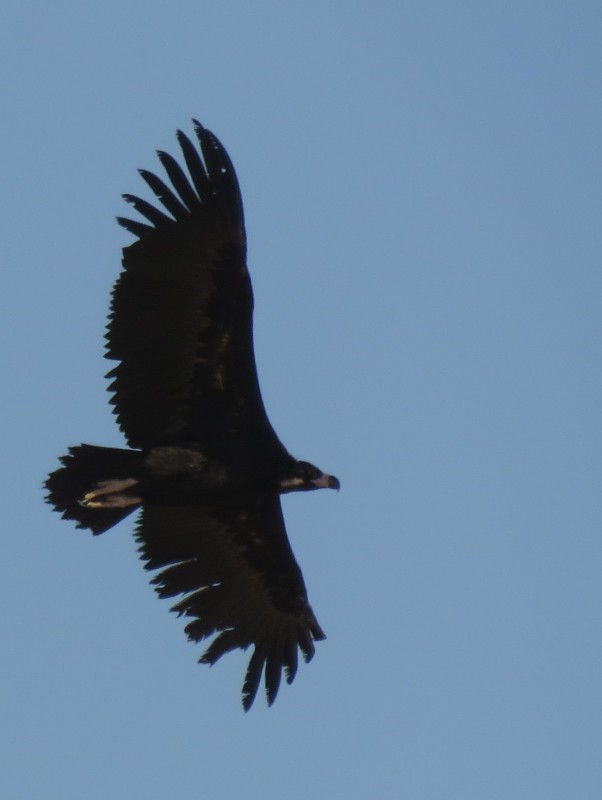 Many thanks to Mohamed Amezian (MaghrebOrnitho) for making available a great deal of info on the species, and to Nick Lethaby and Paul Thompson for sharing their 1987 observation.

(please also see this post from 2018, with some corrections and additional information on the species in Senegal)

The sighting was 60km north-east of Kaolack, in the southern part of the West Central Agricultural Region, traditionally described as the most altered of Senegal’s eco-regions from centuries of agricultural expansion. However, the US Geological Services’ Gray Tappan writes that this expansion peaked in the 1980s and there is now increasingly “unplanned fallow” as the population drifts into the main cities. This may have little effect on what appears to be the best region in Senegal north of Gambia for vultures, but recently abandoned land could account for the huge numbers of large insectivores (notably lesser kestrel, swallow-tailed kite, Montagu’s harrier and white stork) in the area in recent years. There is on-going research into birds and agricultural change in this southern zone, which is well worth inclusion in a birding tour, despite is rather blasted, prairie landscape in places.
As for the cinereous vulture, although its global decline, especially in Asia, has put it on the IUCN Red List as Near Threatened, the population in Spain is on the increase and one could imagine this bird tagging along with the commoner European griffon vulture, which is also on the increase in Spain and as a trans Saharan migrant to Senegal.
Paul

The defunct, twin volcanoes of Mamelles, in Dakar’s Ouakam arrondissement, with Cape Verde Shearwaters and Bottle-nosed Dolphins. The rocky coast of Dakar, forming the Cap Vert Important Bird Area, is an outstanding site for seabirds (photo: P. Robinson). Technopole and its numerous waders, herons, gulls, terns and other waterbirds (including Greater Flamingos when conditions are right) is one of the best sites for birds in the greater Dakar region, So is Iles de la Madeleine, and further afield the Saloum Delta at Palmarin (photos: B. Piot)

A selection of our pictures / Galérie de photos

Why are you crawling around in the sand? I’ll keep an eye (or two) on you. (F. Quist)

Beaudouin’s snake-eagle. Under consideration for raising from Red List Vulnerable to Endangered.

© The authors and Senegal Wildlife 2012-2020. Unauthorized use and/or duplication without permission from this blog’s authors is prohibited. Excerpts and links may be used, provided that full and clear credit is given to the author(s) and Senegal Wildlife, with appropriate and specific direction to the original content.